These benefits include shorter time-to-market: BIS saved six programmer-months by using eXtremeDB rather than internally developed data management code, and gained the reliability of a proven, off-the-shelf database, a BIS senior software engineer estimated. By embedding eXtremeDB, BISMARC also gained a level of responsiveness that is demanded by real-time safety-critical processes, but is impossible to attain using a traditional on-disk, client/server, and/or SQL relational database management system, the engineer said.

The Smolensk facility – generator of some 20 billion KW hours annually, or 1/7 of Russia’s nuclear energy output – uses BISMARC to ensure safety and efficiency in nuclear waste disposal. For this deployment, engineers configured BISMARC’s distributed, redundant client/server architecture into two operator nodes and one administrator node, all running on Debian Linux and off-the-shelf x86 hardware. The nodes – and their embedded eXtremeDB in-memory databases – receive a constant flow of information from the programmable logic controller (the RTP 2500 PLC from RTP Corp.) that controls nuclear waste disposal equipment.

On each node, eXtremeDB serves as a classic SCADA “tag database,” managing some 10,000 tags, or data points, that each represents an atomic unit of information such as a single input or output value. About 2,000 of the points describe the actual manufacturing process; others are system-reserved (for example, showing BISMARC’s current CPU usage). Other tags support special functions such as alarms. While the Smolensk plant uses BISMARC primarily for monitoring, the system enables operators to respond to alarms (configurable as blinking lights, sirens, etc.) by overriding the PLC and controlling machinery directly.

Performance was a key consideration in choosing an off-the-shelf database system for BISMARC. For example, the tag database used at Smolensk for nuclear waste processing is updated three times per second, and BISMARC guarantees a response time of one second or less. Actual response time is on the order of 100 milliseconds or less, BIS Senior Software Engineer Aleksej Penkov said.

The Smolensk BISMARC deployment actually uses two database management systems: the eXtremeDB IMDS to support real-time, embedded processes, and an external PostgreSQL relational DBMS for archiving and provisioning. Most tags consist of both static and dynamic (real-time) attributes. The static characteristics are stored in PostgreSQL and can be used to populate the eXtremeDB databases in the event of system shutdown and restart. eXtremeDB manages real-time attributes, updating them as new data arrives from the PLC, and periodically flushing this information to PostgreSQL.

“Features of the eXtremeDB database, including its in-memory architecture, native C/C++ interface and highly efficient indexing, are critical in delivering the performance BISMARC demands in its tag database,” Penkov said. “This level of responsiveness is not attainable with a traditional relational DBMS that stores all data to disk and requires use of the high-level SQL database interface. We were pleased to discover eXtremeDB and its highly optimized features.”

Other key eXtremeDB features for BISMARC included its support for multiple data types, which enable a highly efficient data design, and its portability. While BISMARC’s Linux support meets the need of most European nuclear power producers, BIS may one day wish to support additional embedded platforms, or offer a 64-bit edition. eXtremeDB runs on platforms including all major server and real-time operating systems (RTOSs), and can even run without an OS in “bare bones boards” configurations. To simplify porting, its design minimizes reliance on OS-specific features.

“Many applications, particularly in fields such as real-time industrial control and safety-critical systems, cannot tolerate the latency inherent in traditional DBMSs. eXtremeDB was designed precisely to deliver the speed and predictability needed for control systems, and the product is enjoying increased adoption in applications for energy producers. We’re pleased that eXtremeDB is playing a key role in enabling BIS to meet its customers’ needs,” said Steve Graves, McObject CEO and co-founder. 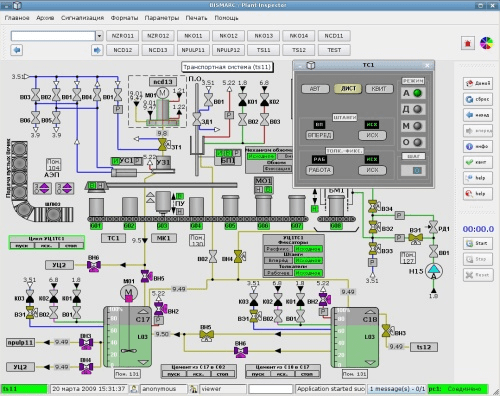 Baltic Information Systems is young, dynamic and fast-growing company focused on development of safety-related IT systems for nuclear power plants. Since 2000, BIS has led innovative projects in this field, typically in Lithuania (where it is based), the EU, and former Soviet Union. Its flagship product, BISMARC, is a universal process control and monitoring SCADA system that may be configured to fulfill almost any plant monitoring task. For more information see www.bis.lt.