For organizations already using C# and .NET, the new eXtremeDB API delivers the speed of a compiled C language database run-time, with the convenience of using a familiar development environment. Developers work with the real-time database entirely from within C#. There is no external database definition, and no requirement to compile a database schema. Instead, the API relies on C#’s reflection capability to discover database classes and their fields that are defined in the application, in the class definition syntax. This streamlines coding, and the developer’s experience is one of working with plain old C# objects.

Optionally, the C# class definitions can be used to generate a schema that, in turn, can be processed by McObject’s schema compiler, so that C/C++ and C# programs can use the same database.

The reflection capability in C# is used to discover database classes and their fields that are defined in the application, via class definition syntax.

With the eXtremeDB C# API, C# class definitions use attributes (defined by brackets) to indicate a database characteristic. 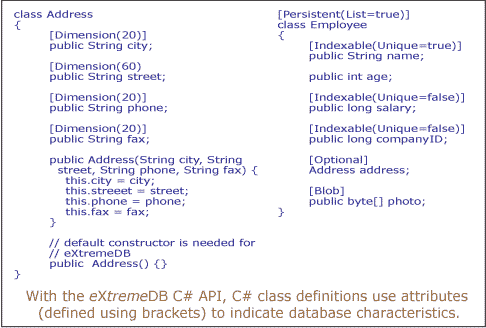