Features for a Faster Database

Database management system features to look for if speed matters to your next project.

McObject has specialized in database management systems since 2001.  We compiled this list of features you might want to search for if fast data management is a priority for your next project.

eXtremeDB was designed from the beginning to maximize database speed, flexibility and reliability for professional developers.  We hope you find this list of value.

In contrast, on-disk databases (HDD/SSD) cache frequently requested data in memory, for faster access, but write database updates, insertions and deletes through the cache to be stored to disk. On the plus side, byte-for-byte, disk storage can be cheaper than RAM, and can also take less physical space.

A hybrid database like eXtremeDB can be all-in-memory, all-persistent, or have a mix of in-memory tables and persistent tables with a simple database schema declaration.

eXtremeDB was originally designed and optimized to be an in-memory database system (IMDS) and this distinction allows for superior performance. Learn why this matters.

The right index can boost lookup speed logarithmically as well as reduce RAM and CPU demands. While the B-Tree is the best known index, many others can be more efficient in specific circumstances, such as geospatial/mapping and telecom/networking applications.  Less well-known indexes include Hash table, R-Tree, Patricia trie, Trigram and others.

Persistent databases keep recently-used records in cache, so they can be accessed without physical I/O. But managing the cache is itself logic that requires substantial memory and CPU cycles, so even a “cache hit” underperforms an in-memory database.  In-memory databases do not cache data.

As a hybrid database, eXtremeDB can be used all in-memory, all persistent or in combination.  Specifying one set of data as transient (managed in memory), while choosing persistent storage for other record types, requires a simple database schema declaration.

Normally, a database cache starts out empty and fills up as data is written to and/or fetched from the database. This is called a “cold” cache, and while the cache is cold, every search request will result in a cache-miss. Some database systems, including eXtremeDB, allow you to save the cache before shutting down a database, and to reload (or “pre-warm”) the cache on restart of the database.

A few database systems, including eXtremeDB, provide some control over the least-recently-used (LRU) algorithm that is used to determine what data to eject from the cache when it is necessary to bring new data into an already-full cache. Generically, this is called cache prioritization.

Learn about cache prioritization and other features for a faster database in our online documentation.

Pipelining is the technique in eXtremeDB that accelerates processing by combining the database system’s vector-based statistical functions into assembly lines of processing for time series data, with the output of one function becoming input for the next. Calculations are pipelined in order to keep data within CPU cache during its transformation by multiple functions. Without pipelining, interim results from each function’s transformation would be transferred back and forth between CPU cache and main memory, imposing significant latency.

Learn more about Pipelining from eXtremeDB.  Pipelining utilizes a built-in library of vector-based statistical functions, with the output of one function becoming input for the next to keep the interim results in CPU cache and reduce database latency.

Threads running in parallel often contend for system resources, actually reducing overall performance. Achieving multi-core’s promised linear performance gains hinges on resolving this issue.  This Webinar, Multi-core and Embedded Software: Optimize Performance by Resolving Resource Contention looks at two such conflicts — contention in updating a shared data store, and threads vying for access to the C/C++ memory manager — in-depth, and addresses them with techniques that can provide the basis to solve other multi-core resource conflicts.

eXtremeDB offers a “pessimistic” MURSIW (MUltiple Reader, SIngle Writer) transaction manager for all in-memory systems. Generally, the exceptional speed of an in-memory database benefits from the greater simplicity of MURSIW relative to MVCC, but either transaction manager can be used in any circumstance, simply by choosing which library to link with the application code.

Database pages can be stored in a compressed format and decompressed when accessed by the application. This can maximize available storage space, which could be important for an in-memory database, or even a persistent database stored on a relatively small SSD.

Run-length encoding (RLE) compression can be applied to time series data (i.e. fields defined as the ‘sequence’ data type). In McObject’s tests, activating this feature reduced storage space requirements by 90% and increased speed in reading the database by 21%.  Compression and RLE are separate features that can be used individually.

“Run length encoding can reduce data storage requirements by up to 90% and increase analytics speed up to 21%.”  From the McObject Webinar, IoT: Implications on Database Management

Data can also be compressed between server and device in eXtremeDB’s Active Replication Fabric for IoT networks. Operating in low-bandwidth networks requires techniques to compress the network traffic. To solve this problem for all network components of eXtremeDB at once, the compression is implemented at the system abstraction layer (SAL).

Learn more about eXtremeDB Active Replication Fabric and how it offers reliable data management for IoT by solving 5 challenges for IoT system developers.

Relational databases typically store data in tables consisting of rows and columns, and transfer data between storage, main memory and CPU cache by organizing the data into pages and transferring whole pages of rows.

Time series data benefits from organizing data in a column-wise manner, wherein a database page contains only values of a single column of data.  In other words, with a columnar approach, tables’ columns (instead of rows) are the basic unit for constructing the database pages used for DBMS input/output.

Read about Active Replication Fabric in our on-line documentation

See a complete list of eXtremeDB features, including the type-safe native API, that maximize database reliability and flexibility. 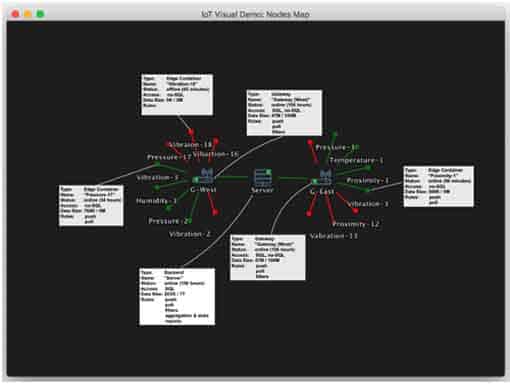 Watch to on-demand Webinars, hosted by experts, about proven database management system practices.  We invite you to watch:

McObject is continually researching, testing, improving on, and retesting our software in order to provide our clients with the best possible data management solutions. We invite you to read “Data Management for Military and Aerospace Embedded Systems” and more.

eXtremeDB is database management wherever you need it.  It’s used by innovative industry leaders in over 30,000,000 deployments world-wide in these markets and others.

eXtremeDB/rt is the first and only deterministic embedded DBMS for mission- and safety-critical hard real-time applications. It is built to satisfy strict requirements for timely execution of avionics and aircraft navigation systems, driver assistance systems, critical medical equipment and similar systems’ data management.

Your content goes here. Edit or remove this text inline or in the module Content settings. You can also style every aspect of this content in the module
Learn more

McObject has been helping industry leaders optimize their data management strategy since 2001.  See a partial list of customers.

No other database management system offers more to developers.

Based on an IMDS tiny footprint eXtremeDB databases can be all-in-memory, all-persistent, or have a mix of in-memory tables and persistent tables with a simple database schema.

eXtremeDB/rt is the first and only deterministic embedded database management system for mission- and safety-critical hard real-time applications.

Pipelining combines built-in vector-based statistical functions into assembly lines of processing for time series data, with the output of one function becoming input for the next.