eXtremeDB’s SQL database interface is a high-performance implementation of SQL.  SQL enjoys a high level of familiarity in the industry. In addition, with its ability to express complex queries relatively succinctly, SQL can often do more in fewer lines of code. Developers in C and C++ may prefer eXtremeDB’s direct SQL API over the ODBC API (discussed below) because it is more concise and a more natural fit for C/C++ programs.

eXtremeDB’s support for the Open Database Connectivity Standard (ODBC) greatly expands the product’s ability to share data with systems ranging from mainframes to servers to desktop applications. Based on the Call Level Interface specified by the SQL Access Group, ODBC is a library of functions that lets any ODBC-enabled application connect to any database for which an ODBC driver exists, and retrieve/insert/update/delete data using SQL statements.

For Java, SQL is accessible via eXtremeDB’s type 3, version 4 JDBC driver. For C#, use the ODBC .NET Managed Provider.

This interface is navigational, consisting of functions that navigate through the database programmatically, working on one record at a time. Major advantages cited for navigational APIs are determinism – it is known, when the application is compiled, exactly how the data will be traversed – and performance, by virtue of bypassing the parsing, optimization and execution of dynamic SQL.

eXtremeDB’s native API for C/C++ is unique in that it is type-safe. The interface functions are generated at compile-time and are specific to a particular data design; the functions “know” the type of data they are intended to handle, and any typing errors will be caught when the application is compiled. This eliminates a major cause of costly run-time bugs. To learn about the benefits of API type-safety, see the Linux Journal article, Self-Diagnostic APIs: Software Quality’s Next Frontier.

In addition, because these C/C++ functions are specific to a given data design, they are highly intuitive, reducing the development learning curve.

Developers in C/C++ can also use eXtremeDB’s Uniform Data Access (UDA) API. This is a static version of the navigational C/C++ API, consisting of a “one size fits all” function library that can be used across all database schemas.

eXtremeDB’s Java Native Interface (JNI) and C# API enable programmers to work with the database system entirely from within Java or C# application code. There is no external database definition, and no requirement to compile a database schema. Optionally, the Java/C# class definitions can be used to generate a schema that, in turn, can be processed by McObject’s schema compiler, so that C/C++ programs can also use the same database.

eXtremeDB’s native interfaces for Java and C# deliver a significant performance advantage, compared to “pure” Java and C# database solutions, in that the eXtremeDB functions execute with the superior speed of compiled C code.

Python is a programming language that is favored by many data scientists/analysts. With Python, developers can create prototypes and validate their ideas in a few lines of code while utilizing a vast set of powerful development tools and libraries. Using Python alongside the eXtremeDB database system, developers can implement their ideas quickly and optimize data intensive algorithms rapidly by testing changes to code, database tables, and indexes. 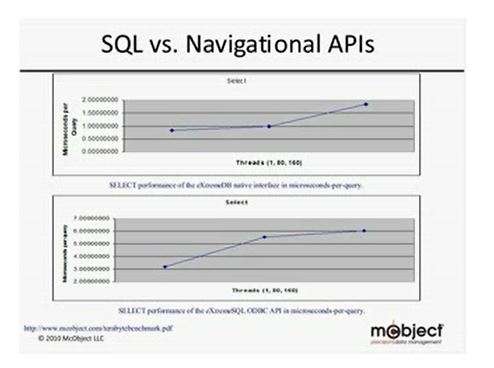 The advantages of proven, third-party database software for embedded systems are great. But the sheer volume of database technology options is huge, and choices can significantly affect results. This Webinar provides a roadmap, looking at critical distinctions such as client/server vs. in-process architecture, SQL vs. navigational APIs, and different approaches to fault-tolerance.

Learn more about the DBMS offering multiple APIs with a free trial of eXtremeDB.