eXtremeDB for HPC offers columnar data layout and the pipelining of over 100 built-in statistical functions for faster analysis of time series data.

What is time series data?

Time series data is usually some system-generated data that arrives in time (chronological) order. The world abounds with examples. In the financial markets, trade-and-quote (TAQ) data is inherently time series. In the Internet of Things (IoT), sensors capture and stream measurements.  A time series database with built-in data analytics functions to process this data can give the user a competitive advantage.

The time interval between instances can be regular or irregular. For TAQ data, the interval is irregular, since it depends on trading systems that are either humans placing orders or bots reacting to market buy/sell signals.

Most often, time series data is append-only and immutable, meaning that each new data point is a new entry in the time series and, once recorded, never changes. But, not always. For example, when merging multiple financial market data feeds for the purpose of having a single golden standard, it can be necessary to insert new elements, update elements or delete elements.

eXtremeDB is based on a blazingly fast storage engine for embedded systems, delivers scalability, low latency and advanced analytical capabilities for HPC workloads. Learn more about eXtremeDB for Big Data and Analytics.

Traditional database management systems bring rows of data into the CPU cache for processing. But time series data is naturally columnar, and handled more efficiently by a column-based layout. eXtremeDB for HPC stores time series data with a columnar layout, and “normal” data with a conventional row-based layout. The result is higher performance for time series analytics, resulting from a database system that best leverages the CPU cache speed and avoids costly (in performance terms) fetches from storage and main memory.

Learn more about eXtremeDB for HPC

Time series analysis is a specialized sub-domain of data management, with special rules. Applications that crunch time series data (including market data) benefit from a DBMS tailored to the task.

Traditional DBMSs bring rows of data from a database table into CPU cache for processing, but a time series, such as a security’s price over time, typically occupies a single column within a table. Much of the rest of the row is irrelevant for time series analysis, making it inefficient to fetch entire rows. For example, to compute volume weighted average price (VWAP) for an equity in a certain time frame, we need the timestamp, trade price and volume of shares traded for each trade (execution) within the time frame. We don’t need any other columns.

With its sequence data type, eXtremeDB implements columnar data layout. This means data is transferred column-by-column (not row-by-row) from storage into RAM (database cache) and I/O is not wasted transferring irrelevant data, and data is also transferred from RAM into CPU cache column-by-column, and the CPU cache is not “flooded” with unneeded data. 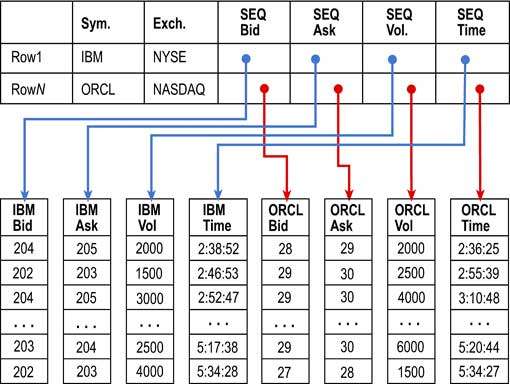 Database management system features to look for if speed matters to your next project.

While columnar data layout accelerates time series analysis, conventional layout using rows is often faster for data that is not sequential, including for relational database ‘join’ operations. eXtremeDB implements row-based layout for all data types other than sequences. Row and columnar layout can be combined in hybrid data designs to optimize the performance of managing mixed data.

Throughput between main memory and CPU cache is 2x to 4x slower than the CPU can process data. Traditional DBMSs traverse this bottleneck frequently, with the CPU typically handing off results of each step of a multi-step calculation to temporary tables in main memory.

Watch a video about Pipelining